Ethanol production could claim 47% of the U.S. corn harvest The EPA can relax the ethanol mandate, allowing corn destined for ethanol production to be used for food and feed Opponents argue incorrectly that a waiver would be irrelevant the possibility of a sub-par harvest in 2013 argues strongly for a waiver now

The severity of the drought of 2012 affecting corn production in the Mid-West has been compared to those experienced in the 1930s. Yet paradoxically, we may have been better off in the 1930s when virtually all the corn crop was dedicated for food and feed use. Pre-drought expectations called for a 14.65 billion bushel (BB) harvest with 5.11 BB going for ethanol production, 6.72 BB for domestic food and feed and the remainder for exports (Figure 1). The USDA’s August 10, 2012 estimate calls for a realized corn harvest of only 10.8 BB. If ethanol consumption is unaffected, domestic food and feed consumption would drop from 6.72 BB to 4.2 BB—a 37% reduction. Domestic food and feed uses will absorb the brunt of the shortfall unless ethanol production is substantially reduced. The economic consequences are predictable: since mid-June corn prices are up 55%, ethanol prices are up 19%, and U.S. food prices are expected to rise between 3 and 4% next year. The effects of rising food prices in developing countries will be particularly severe.

Relaxing the mandate for 2013 would allow corn destined for ethanol production to be diverted instead for food and feed, thereby sharing the shortfall. A no brainer? Not to some respected academics that have set forth arguments that a waiver would make no difference and if it were to make a difference, it would be unfair. Let’s see where they are coming from and why we think they’ve gone wrong.

A WAIVER WOULD MAKE NO DIFFERENCE 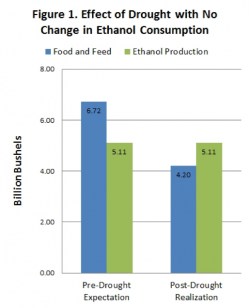 1. A waiver of the ethanol mandate for 2013 would have no effect for two reasons:

2. The existing regulatory apparatus could accommodate a substantial ethanol reduction with no need for a waiver. Even if gasoline blenders found it both economically and technically desirable to reduce ethanol consumption, a reduction of 2.6 billion gallons (potentially freeing up almost 1 BB of corn) could be achieved without a waiver by using excess permits (called RINs) already present in the existing regulatory apparatus.

EVEN IF IT MADE A DIFFERENCE, IT WOULDN’T BE FAIR

3. The cause of the economic harm is the drought, not the ethanol mandates. The EPA cannot change the magnitude of the loss by granting waivers. At best, it can only redistribute that loss among the affected parties—ethanol producers, corn farmers, livestock producers, and food consumers.
4. Even if a waiver redistributed the losses, it would not be “fair” to ethanol producers. After all, ethanol plants were built in the expectation of a guaranteed market by the Energy Independence and Security Act (EISA) of 2007.

Does it then follow that the EPA should reject the waiver request? We believe not, for two reasons. First, there is a substantial probability that because of events yet to unfold, a waiver now could avoid an even more severe economic disruption in 2013.

Second, we reject Arguments 3 and 4 above. The EPA’s decision is much more than a question of redistributing the gains and losses to various interest groups engaged in a zero-sum game. As discussed later, a waiver could potentially avoid substantial losses in 2013 that could easily trump the rationale of fairness to ethanol producers.

There is a significant probability on the order of say .3 or .4 that a waiver would be effective and could have large social benefits. Under what conditions might this happen?

Suppose the drought in 2012 lingers into the 2013 crop year, resulting in another year with below average corn yields. A look at historical weather patterns suggests that severe drought years are not generally followed by a full rebound to pre-drought levels in the following year.

Taking USDA data on corn yields per planted acre going back to 1926 and excluding the current year, one finds that there were 12 years when the yield per acre declined from the previous year by more than 15%. The question is whether yields per acre rebounded in the subsequent year to at least match the pre-drought yield per acre. In 8 of the 12 drought years, yields failed to fully rebound to previous levels leaving yields on average 6% below their pre-drought levels.

A major argument in support of a 2013 waiver has less to do with the current crop shortfall and more to do with allowing for flexibility in dealing with a potential anemic rebound in next year’s corn harvest. A rising corn ethanol mandate for 2014 of 14.4 billion gallons, coupled with an anemic rebound of corn supplies, is a prescription for even higher corn prices.

Another major uncertainty favoring a waiver is future crude oil prices in the face of a weakening world economy. Some combination of sharply higher ethanol prices coupled with lower crude oil costs could make ethanol no longer the most cost-effective octane enhancer. However, this substitution would only occur if the mandate were waived. Absent a waiver, ethanol plants will simply bid up the price of corn and gasoline blenders will have little choice but to pay the higher ethanol prices.

With a 2013 waiver in place, refiners would have time to implement the planning to produce higher octane gasoline with lower ethanol content by summer 2013. For example, if by summer 2013, corn harvest forecasts show only a partial rebound and ethanol is no longer the cost-effective octane enhancer, refiners could begin producing higher octane gasoline blends with lower ethanol content. Previous experience in refinery economics tells us that refiners have surprising flexibility to alter the product mix of the refinery, and specifically the characteristics of the gasoline blend pool.

A waiver could avoid an even more severe economic disruption in 2013.

Refiners with access to water can choose among a wide variety of crude oil types and all can vary the intensity with which they use the downstream processing units in the refineries. Because of the marked decline in demand for gasoline, refiners frequently find themselves with spare capacity in the reforming and alkylation units—key processing units for producing higher octane gasoline. With a waiver in place by January 2013, most refineries should have no difficulty producing a higher octane gasoline pool by summer 2013. Conversely, with no waiver in place, refiners would have no reason to begin the contingency planning and implementation tasks necessary to produce such blends; they would remain locked into the status quo. Without a waiver, refiners would have no reason to develop ethanol substitutes.

If the weather cooperates with a reasonable crop rebound in 2013 and ethanol remains the most cost-effective octane enhancer, what then would be the downside of granting a waiver? Gasoline blenders will continue to blend ethanol up to the limits. The effects of a waiver would be benign. It would impose neither harm nor help.

But what if weather conditions in 2013 conspire against us and/or oil prices decrease? In this case, a waiver in January 2013 would set in motion supply planning for that contingency. By summer 2013, refiners would be fully capable of supplying higher octane gasoline with lower ethanol content if ethanol was no longer the most cost-effective octane enhancer. Even higher corn prices could be avoided. This would surely mitigate the conflict between food and fuel which is particularly acute in developing countries. It is often forgotten that the U.S. is a significant corn exporter; price movements here have international ramifications.

This brings us back to Arguments 3 and 4 above. Is it true that even if waivers made a difference that the effects would be bad? Does it follow that the cause of the harm would be the anemic harvest rebound—not the mandates? If we can take actions now to mitigate the effects of an anemic crop yield in 2013, then the argument that the cause of the economic harm is the drought and it’s just a matter of who the winners and losers are no longer follows (see Tyner et al).

To the contrary, by failing to build in contingency options today, the EPA would be culpable. No longer is the issue one of simply redistributing a fixed pool of money among the various interest groups. The issue becomes avoiding future losses with real world costs. For this reason, the EPA’s decision is particularly important.

As for Argument 4, we do not believe that supporters of the 2007 EISA ever intended to guarantee a market for ethanol producers to the absolute disregard of the nation’s and world’s food and feed consumers. Indeed, this is why Congress added Section 211(0)(7)(A) to EISA and empowered the EPA to modify the mandates. Issues of fairness to ethanol producers are of a second order of importance.

Particularly, in many developing countries (such as Kenya, Pakistan and Cameroon) the food expenditures of the average citizen are at least 40% or more of their income. When cereal grain prices jump by 67.4%, as they did in 2010, the poor simply eat less. They have no other cheaper food to substitute. Indeed, citing World Bank data, the Food and Agriculture Organization of the United Nations reports rising food prices had plunged nearly 70 million people into extreme poverty in 2010-2011. Moreover, UNICEF unmistakably points out that “malnutrition is the underlying cause of more than 1/3 of all childhood deaths. Prices for basic food like rice, maize (corn), wheat, cooking oil, sugar and salt are rising sharply, forcing millions of the world’s poorest children into severe malnourishment and starvation.”

As the primary exporter of corn, our actions affect world food prices. We are only now beginning to see the effects on food prices resulting from the 2012 drought and the ethanol mandates. Even though U.S. consumers only spend 11.4% of their income on food, we cannot ignore the effects of our actions on others.

Because of the magnitude of the existing corn harvest shortfall coupled with the large ethanol mandates, policy makers face extreme uncertainties looking into the future with potentially large economic ramifications. Precisely, because neither the economic modelers nor the decision makers can foretell all of the factors affecting corn harvests and ethanol use in 2013, a waiver is a wise course of action. To be sure, a waiver may have no effect and turn out to be irrelevant. Even so, we argue that it has no downside. But if an anemic harvest rebound occurs in 2013, a waiver could avoid substantial economic dislocations in 2013 and beyond.
Regulators should opt for flexibility.

James M. Griffin is Director of the Mosbacher Institute. He is the author of A Smart Energy Policy: An Economist’s Rx for Balancing Cheap, Clean, and Secure Energy (Yale University Press, 2009).

Rachael Dahl is a graduate student at the George Bush School of Government & Public Service and a Mosbacher Fellow.

James M. Griffin is Director of the Mosbacher Institute. He is the author of A Smart Energy Policy: An Economist’s Rx for Balancing Cheap, Clean, and Secure Energy (Yale University Press, 2009). Mauricio Cifuentes Soto is a 2012 Master’s candidate at the Bush School.
← The Emerging Libya Story. Did You Know?
Obama’s War on the West →