Obama’s War on the West

By Robert E. Grady | Managing Director at Cheyenne Capital Fund & former Associate Director of the White House Office of Management and Budget On November 6, 2012 In With No Comments 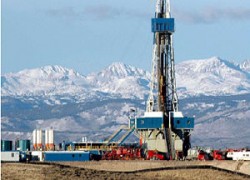 One of the more strained exaggerations that took place in the recent presidential debates was the one in which President Obama declared his love for energy development. Natural gas and oil production are at the highest levels in decades, the President proclaimed in the second debate at Hofstra University, adding “We have seen increases in coal production and coal employment” — a proclamation no doubt aimed at convincing those in energy-rich Mountain West states such as Colorado and Nevada that he is no enemy of the conventional energy development on which their economies depend. A more careful look at the Obama record, however, reveals a consistent pattern of hostility to western interests.
One of the most important sources of employment in the West is energy development. Colorado has in recent years made a focused and not yet entirely successful effort to become a hub of renewable energy development, but in 2008 fully $12 billion (or 5%) of Colorado’s gross state product was the result of mining and conventional minerals such as oil, gas and coal — a contribution larger than the entire construction industry of the state, on a par with its significant transportation and utilities complex, and almost as large as the Centennial State’s entire manufacturing economy. The story is even more dramatic in neighboring states – in New Mexico, mining last year accounted for almost 8% of gross state product, bigger than any other sector besides government, real estate, and professional services; and in Wyoming mining was by far the largest contributor to gross state product and was the number one employer outside of government.

Robert E. Grady is Managing Director at Cheyenne Capital Fund, a $500 million private equity firm based in Denver and Jackson, Wyo. A former Associate Director of the White House Office of Management and Budget (OMB), he helped draft the Clean Air Act Amendments of 1990, and now serves as an informal economic advisor to Wyoming Governor Matt Mead.
← Ethanol Waivers: Needed or Irrelevant?
Cairo Protests, the Blind Sheikh and Benghazi →