Holder Smolder – The Fires of Abuse 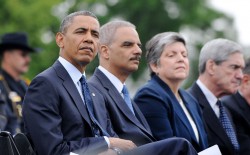 It’s getting a little hotter in DC. What’s somewhat appalling is that the President and his Attorney General seem oblivious to the flames burning in their own houses. Is this a manifestation of supreme arrogance? All we know is that it’s mind boggling these guys are still in office. Seriously.

Oh yes, the loyalists are standing by their men, and continue to insist all three of the current scandals are much ado about nothing; just the consequence of partisan attacks. Seriously?

Let’s see if Opine Needles can help lift some of the delusional fog.

Have you noticed they both exude or feign righteous indignation when their integrity or truthfulness is questioned? They actually believe they will continue to convince most Americans they know nothing about the various scandals burning around them. Seriously?

This is what people must know. Whether its the Benghazi lies, IRS abuse, or egregious and insidious Department of Justice assaults on members of the media (using the Espionage Act as the “cover”), it is all born of the message sent from 1600 Pennsylvania Avenue. The leader sets the tone. This leader has made it clear from day one that anyone who doesn’t agree with him is wrong. He does not countenance dissent. It’s his way or the highway, and anyone who stands in the way does so at his or her own peril. Is it really any surprise that scandals are manifesting themselves left, right, and center?

The media (until now) and the majority of the electorate have heretofore been willing to look the other way when this administration bends the truth to serve its agenda. So too are eyes averted when the Constitution is ignored if heeding same proves to be inconvenient to the quest for change.

So the question is whether enough people have finally had enough. For the future of our country, we pray this proves to be the case. Seriously.

← Abuse of Power
Is Racism for Whites Only? →