By Jim Pierce On March 7, 2013 In Blog, Think Right With No Comments 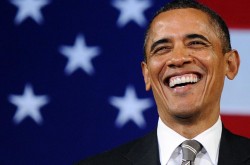 I have a confession to make. After more than four years, I now realize I was wrong. Indeed, I think President Obama may be one of the greatest Presidents in American history. There, I said it. Now please allow me to tell you why.

Our economy is raging. I mean, it is blowin’ and goin’. We owe it all to this President. The Republicans were crazy to think the United States couldn’t print money, borrow endlessly at low interest rates, and leverage our children’s future. The President has proven we can do these things! This is the era of no accountability, and I am not going to miss one more day of it!

Our US Treasury is taking in the highest level of tax revenue in the history of the United States. And just look at how we are making tough decisions about spending in D.C.! Witness how our businesses are investing in the future! It is clear to any rational thinker that we can easily afford to raise more tax revenues to generate more government spending. These corporate jet and oil company tax breaks are killing us. It’s time to end this favoritism. Seriously, if we eliminate the tax breaks for private jets and oil companies we can literally pay for hours in one day of government spending. Every little bit helps. Shame on me for sticking my head in the sand for so long.

I harped for too long on the fact that the sequester was born of the President’s retreat from his handshake agreement with Congressman Boehner in the summer of 2011. I made the mistake of letting facts get in the way. Our problems are clearly the result of Republican obstructionism. The funds presently sequestered represent increases in spending in 2013. None of these dollars cut any expenses incurred in 2012. Give the President credit where credit is due. Shutting down the White House tours and threatening air traffic control havoc is sheer genius. He has once again cornered the GOP. I like a winner. I like President Obama.

Entrepreneurs and small businessmen have long been the backbone of this country. President Obama understands these people. He appreciates how hard it is to earn a living and strive to achieve the American dream. After all, he was a community organizer.

A study of history clearly confirms that redistributing wealth earned by entrepreneurs and businesses (small and large) will serve to bolster economic growth. Look at how the Soviet Union thrived! I made the mistake for the first 56 years of my life believing the likes of Milton Friedman. I now know the path of hope and prosperity lies in the wake of brilliance espoused by John Maynard Keynes and Paul Krugman.

I was one of the first out of the box on the Arab Spring. I warned you about the unintended consequences of throwing Egypt’s President Mubarak under the bus. I so mistakenly provided you with background information about the Muslim Brotherhood. Some on the left (I called it the left when I was on the right) took umbrage at my suggesting those in the “Hood” may take Egypt in a direction far direr to our interests than any route ever taken by Mubarak. What can I say? My bad. Morsi and his team are great! Heck, we just sold them some F-16s and promised them another $250,000,000 in foreign aid. Thank God we have taxpayer dollars to spare. How wrong could I possibly have been? Mea culpa.

Then there is Iran. I thought they were mocking us! No way: now I know they are scared to death about the tough line the Obama Administration has taken with them. They are building peaceful nuclear weapons, and our President knows he can take them at his word. You have to admire the guy. He can really make the tough calls.

Let me be very clear about Benghazi. I should not have railed on our President about the video. Look, we have a big government. There is no way we can expect our Secretary of Defense, Secretary of State, National Security Advisor, Director of the CIA, Ambassador to the United Nations, and President to possibly know that Al Qaeda is active in a remote place like Libya. How on earth can these exalted leaders have been expected to have the time to read the pleas for help from our Libyan Ambassador? We helped the Libyans murder the evil dictator Qaddafi, so why shouldn’t we expect peace and calm in the newly liberated state? It is completely reasonable that the entire administration blamed the death of four Americans on a low rent video made by a Coptic Christian. And you betcha, thank the Lord we threw the guy who made that movie in jail. He was clearly a threat to all Americans. If I could do so in person, I would apologize to the President for questioning his integrity. He clearly believed the video was to blame for the murder of our heroes in Benghazi.

I constantly rushed to the defense of President George W Bush. What was I thinking? That man had no regard whatsoever for public opinion polls. He did what he thought was right for the country. Every decision may not have been the best, but it was made with his hand on his heart. He knew he would endure scorn from the media, those on the left, and, heavens forbid, even from some of those on the right. In retrospect, was I taking stupid pills? The President has clearly demonstrated that principals and strength of conviction do not matter. What matters is how to say and do whatever needs to be said and done to pursue the redistributionist agenda. You go, O-man!

I have written about the travails of Europe. I mistakenly cited a trail of tears; one littered with the bodies of Ireland, Spain, Italy, Greece, and Portugal. These are not tears! These countries are poster children for progress. Their progressive-left policies have lifted many more of the people into state sponsored poverty! This is a much better form of poverty than that which applies to the distinct minority and is created by states that rely on the antiquated private sector. In Europe, far more people get to enjoy rationed poverty. There is less wealth, and thus, less inequality! Thank the Lord for this revelation. I kick myself daily for not seeing the light sooner.

No public confession would be complete without an admission of how unfair I have been to our mainstream media (MSM) . These are hard working graduates of our nation’s finest colleges and universities. Let’s remember, Vietnam is gone. Reagan is dead. There is no war to hate, and no Republican to demonize. Thank goodness there is a President to embrace and lionize! The MSM knows greatness when they see it. They know they have embraced a man who is committed to changing America forever. No President has attempted such a radical makeover. C’mon, this is the stuff of greatness! These geniuses in the media figured it all out years ahead of me.

As much as my subconscious wants me to forget health care reform, how can I? Of course we should use the UK as our model. Look, let’s face it; we have a population problem. How ingenious is it to appear to be doing something for the people and at the same time actually take strong action to prevent longer and healthier adult lives! It all boils down to redistribution, and now that I understand the President’s motives, I fully embrace his wonderfully Machiavellian tactics.

The argument over the 2nd Amendment is yet another example of my misguided ways in years past. The left scorns the idea that our right to bears arms is related to our Constitutional right to resist tyranny. They say the state of our state and federal police forces render such conversations moot, and the citizen can no longer practically defend himself. I now realize they are right. All of you who are still clinging to your guns and bibles need to give it up. Let’s face it, there is no way we are going to be able to shoot down a predator drone, right? I mean, really, we won’t even know it’s coming before it takes us out. You have to know when to hold ‘em, and when to fold ‘em. It’s time to hop onboard the Obama train!

There are undoubtedly other reasons that may have caused my surprising reversal, but I hope I have none-the-less made a compelling case for your consideration. I know some of you will be disappointed in me, and for that I apologize. I am jumping on the Obama express. I may be late, but I think I know greatness when I see it. And speaking of greatness, I cannot wait to line up behind Vice President Biden’s 2016 campaign!