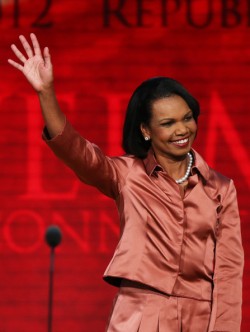 Condi Rice – She is the Real Deal!

The Conventions have come and gone and in spite of the main stream media’s assertion that the president is riding a veritable tidal wave surge into the final lap, Opine Needles thinks the needle didn’t move in much of a positive way for either candidate. This election is different. Our 40-40-20 rule is not panning out. Its more like 47.5-47.5-5. In other words, both candidates are vying for about 5% of the voting population that remains undecided.

National polls are indicators, but with each passing day, they become more and more meaningless. Barring any major game-changing event between now and November 6, the election is already baked in 40 states. Here are the states that will decide the winner.

In each of these states the race is a statistical dead heat. (They are all within the plus or minus 3 % point margin of error.)

There was one speech at the entire DNC with a hint of substance; yes, Bill Clinton can still spin a good yarn. He didn’t make a case of the president’s re-election. No, he made a case for democrats, and for his ongoing quest to expunge his Oval Office indiscretions from the memories of most Americans. We disagree vehemently with him, but we give credit where credit is due; that fella can talk.

Remember our blog about women? Back on March 20th of this year, we told you they would decide the election. (Click here if you would like to revisit that blog, but come back…we’re not done yet.)

Dang, we wish we could make a profit being so right all the time! We built this bundle of bloviating bias!

Women will be the deciding factor. So with that in mind, let’s ponder how the two candidates approached the female vote during their respective conventions.

The Republicans trotted out Condi Rice and Governor Susana Martinez. The democrats countered with Sandra Fluke and Nancy Keenan. Really? Say no more. Is it any wonder that female viewers watched our heavyweights and then came away from viewing the DNC asking “Where’s the beef?” The constant cynical pandering did not produce the expected result.

Because the Obama team cannot run on its results, it has chosen to wage a campaign preying upon emotions and fear. Their entire game-plan is predicated on:

At the DNC, it was the incessant barrage of women blathering on about their reproductive organs, choice, and barbarian republicans that created the lasting memories of the week-long event. Was the strategy successful?

In the past few weeks, sentiment amongst mothers in the U.S. has moved in Romney’s direction by several percentage points, now giving him an opportunity to negate the strong advantage Mr. Obama enjoyed with females in 2008. This is not an accident. The Obama campaign preached to its own choir. It did not need to pander to the Gloria Steinhem’s of the party. But it did. The president needed to make a case for his re-election to the majority of women in the United States who want to know:

They are the mothers.

But he did not do this. He told the already converted audience that it had a right to expect taxpayer funded access to birth control. Not only did he miss the target, but his shot ended up as a self-inflicted wound. The President miscalculated. Time will tell whether the wound is mortal.

← Obama’s Campaign Strategy
Into the Abyss! →