We start by thanking many of you who have written inquiring about our prolonged silence. What can we say? Real world work is hectic, and when the full impact of the President’s redistributionist quest hit us on 15 April, we went into a bit of a deep funk. Alas, Benghazi can wait no longer. 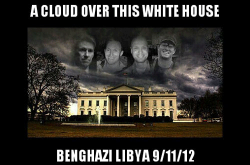 On September 11, 2012, our US Ambassador and 3 colleagues were murdered in a pre-meditated terrorist assault on our compound(s) in Benghazi, Libya. That much you know, and if you don’t, God help you.

For up to three weeks following this attack, the President and key leaders of his cabinet (including Secretary of State Clinton) tried to blame this attack on a spontaneous protest over a low-budget anti-Islam video made by a Coptic Christian living in California. Our enraged feds went so far as to arrest the director/producer of the film to demonstrate to the Muslim world that our right to free speech will only go so far. If anyone incites violence or death, he or she will be silenced. Fair enough, we guess. After all, that’s basically what Abraham Lincoln did, and so too did Messrs. Wilson and Roosevelt (in myriad ways) in the two great wars of the 20th century. In any event, that is a discussion for another day.

But whoops, Houston (and to the rest of the world) we have a problem. The video had nothing to do with the murder of 4 hard working Americans. Radical Islamic terrorists killed them, and did so with premeditated malice.

“The analysis (of what actually happened) can be parsed into multiple pieces: what led up to the events in Benghazi in the months before the attack, what occurred in the hours just prior to during and after the attack, and what has transpired since the attack. One of the egregious narratives floated at the time of the attack was the storyline of an off-color video touching off spontaneous protests.

Egypt’s President Morsi (aka Mursi, the Muslim Brotherhood candidate) has set a goal for the Blind Sheikh’s release. During his inauguration speech, and at other occasions( Morsi Promises to Free ‘Blind Sheik’ from U.S. Prison
| Wall Street Journal), President Morsi(aka Mursi) called for the release of the Blind Sheikh. To understand President Morsi’s intentions, one needs only recall his campaign for President, videos of which have been captured by MEMRI, one of which can be found in the article found here.

Other than the proclamation from the head of Al Qaeda, are there other ties between Cairo and Benghazi? Possibly yes. First, some press reports indicate the security at the Benghazi compound was in contact with the Muslim Brotherhood in Egypt. Second, a document from Rep. Issa’s prior hearing linksthe February 17th Brigade in Benghazi that was protecting the mission to the Muslim Brotherhood in Libya, and other press reports indicate Blue Mountain, the private security contractor, also may have had ties. Further reports imply Blue Mountain may have worked with the attackers.

The name of the Blind Sheikh was not unfamiliar in Libya. The attacks on the British diplomat, U.S. mission and Red Cross in Benghazi in May 2012 and June 2012 had been carried out by the Blind Sheikh Brigade.

The question remains “What negotiations has this administration had with the Egyptian government about the Blind Sheikh?” In September, Victoria Nuland, the State Department spokesman, was compelled to make a statement that there had been norecent discussion of the release of the Blind Sheikh. (Emphasis added.) This begs the question of the definition of ‘recent’ and ‘release.’

Is this one of the many elements to the Benghazi fiasco that some hope will not see the light of day? Perhaps we will learn more this week.”

So let’s put all this in perspective. This attack occurred two months before Election Day. President Obama and members of his cabinet had made it very clear that all eyes should be on their redistributionist domestic agenda (ok, those are our words, not his) because we were:

In effect, the message was clear. We had won the current war on terror.

How inconvenient could the Benghazi murders possibly have been? The response from the White House, State Department, and Pentagon was one of denial. They buried there heads in the sand when quick thinking may actually have saved lives, and then again as they wrote and re-wrote after the fact statements summarizing the attack. Politics prevailed over the lives of murdered US citizens. To acknowledge the truth, the administration would have had to rewrite the 2012 re-election theme, and apparently, they were not willing to do so.

Two weeks after the murders, our President addressed the world at the UN, and continued to hide behind a bogus story. He steadfastly tied the video to the Benghazi attack. See an excerpt of his speech here.

We were teenagers when the winds of Watergate blew into our world. There were no doubt millions of Americans who refused to take the cover-up stories seriously until the well of truths overflowed, and reality was impossible to ignore any longer. This is where we find ourselves today. The left wants this issue to disappear. Loyalists refuse to even acknowledge there is a problem. But there is a problem, and if you ask us, glossing over and deceiving the public about the murder of our public servants is much worse than lying about a bungling break-in by Presidential cronies and hacks.

Where is the outrage? This issue is real. It happened. Don’t let the left brush it under the rug as though it is just another example of partisan politics.

The damage this administration has wrought is immeasurable. We will bear witness to it over the passage of time. The people spoke, and so we live with that for which 51% of us voted. God bless America. But no one on the left or right should countenance obfuscation and deceipt from our leadership. Remember the old adage; “Power corrupts, and absolute power corrupts absolutely.”

Folks, if this issue is allowed to die without consequence to the perpetrators of deceit, we have entered the era of absolute power. And if, God forbid, we wake up one day to learn that we have handed the murdering Blind Sheikh over to the Muslim Brotherhood in Egypt, our just being able to say “we told you so” won’t be good enough for any of us.

← I Was Wrong
Abuse of Power →